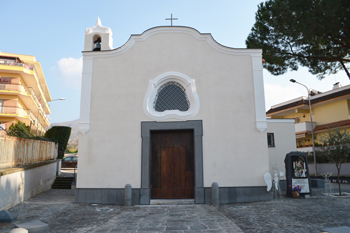 Historical Information: XVI – 1743 (preexistences entire Well) – The first news of the existence of the chapel of San Vito date back to the sixteenth century. Documents of the Historical report the news that the chapel was built by two local families: Fam. Urzino and Fam. Slave.

Description: la facciata si presenta piatta e priva di ripartizioni. The prospectus is characterized marginally by two pilasters that support the roof cornice of the gable of curved offsets. Centrally a large trefoil window opens just above the only entrance. The only surplus decorative Rococo, discreetly kept the facade, is the culmination of the small bell tower. The spatial organization of the interior is centered on an elliptical. A door chestnut, the end of the eighteenth century, introduces in the sacred building. The entrance and the main altar are arranged along the main axis of the ellipse, as the door of the choir and sacristy occupy the extremes of the minor axis. The stucco pilasters crowned with leafy capitals divide the whole space parietal, alternating four niches three windows ansate. Above the entablature small stucco, that runs along the entire perimeter, stands the hood decorated with bands radial, starting from the mentioned pilasters below, ending in a small central ellipse stucco relief. The colors that cover the inside are white with the dark travertine used for projecting parts and Naples yellow used for the flat. Covers: Chapel has an inner cover cap elliptical or upward gives, the central body outer, a distinctive architecture of typical Arabic houses estradossate vesuviane. The environment of the left hand, is covered by a barrel vault which follows the course of the trapezoidal perimeter.
Decorative items: besides the leafy capitals stucco ending, in the part below, three oak leaves, notable are the frames of the three plant trefoil windows inside and the large cartouche leafy volute above the stucco frame of the one altar. At the center of the 'neoclassical altar, painted stucco, is recessed the tabernacle of the earliest years of the nineteenth century gilt wood and painted faux marble. Of two fonts in white Carrara marble shell-shaped, positioned on the first two pilasters input, only one is the original of the late eighteenth century.
Structural system: the architecture is stone pyroclastic. The recent restoration has highlighted as structural use of Vesuvius rubble mixed with lime and lapilli. Currently the only element in tufa stone is the upscale curved pediment. The entire factory is based entirely on supporting walls in stone vesuviano.
Floors and pavements: the floors of the Chapel, the sacristy and the choir will have to cardamone, terracotta tiles in Campania. The riser lava stone presbytery, coming from the quarry Fiengo Herculaneum, reflects that in chopped lime and lapilli of the eighteenth century. Finally anticipates the presbytery a great "Riggiola" Neapolitan 40×40 on which is engraved the coat of arms crowned with the symbols of the martyr Vito and below are the words: D.O.M. / established / A.D. FacebookDisclaimer
Plant: la Cappella presenta una struttura planimetrica quadrangolare che ingloba un ambiente centrale a pianta ellittica.

Where is it: Piazza Municipio – San Sebastiano al Vesuvio (NA)